Helen Keller became deaf and blind at 19 months old. She was famous from the age of 8 for her experience of overcoming great obstacles in order to learn to communicate. This early part of her life is the most well-known, but the story doesn’t end there. Helen would go on to become not only well educated, but famous in her own right as an author and activist. She has even been said to be one of the 20th century's leading humanitarians and was named one of the most important people of the 20th century by Life magazine.

Here are 12 facts you probably don’t know about Helen Keller.

#1 Her famous life story was based on the autobiography she wrote. 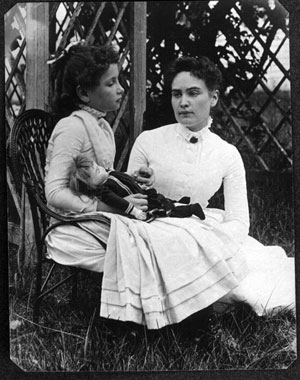 The Miracle Worker tells the story of Keller’s breakthrough in understanding the connection between words, language, and the world around her. Many people don’t realize The Miracle Worker story is based on Keller’s first book, the autobiography “The Story of My Life,” which was published in 1903 when she was just 24 and went on to become a renowned classic, translated into 50 languages.

#2 She thought of herself as an author first. 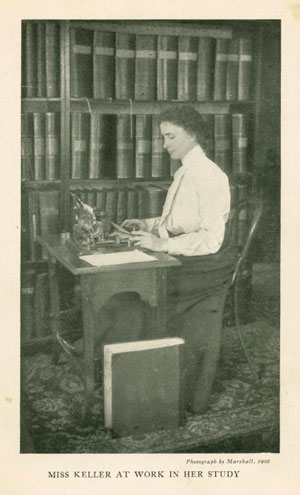 Although she accomplished many things, Keller saw herself as a writer first – her passport listed her profession as "author."

She published fourteen books, many articles and essays, and was a frequent contributor to magazines and newspapers. The Helen Keller Archives contain over 475 speeches and essays that she wrote on topics such as faith, blindness prevention, birth control, the rise of fascism in Europe, and atomic energy.

#3 She was an Oscar winner and her life inspired two Oscar-winning movies. 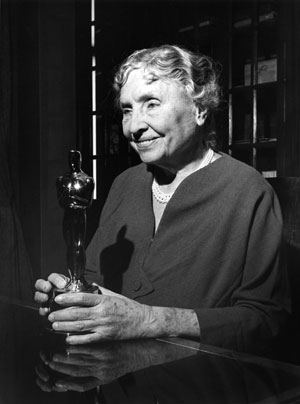 Helen Keller won an Oscar for Best Documentary in 1956 for the story of her life Helen Keller in Her Story (also known as The Unconquered). She accepted the Academy Award at the age of 75. Keller is the only person to win an Academy Award for appearing in a documentary about her life and also have someone else win an Oscar for portraying her in another movie about her life.

The Miracle Worker story won many awards. The 1962 film won Academy Awards for Best Actress and Best Supporting Actress. Patty Duke, who won the Oscar for Best Supporting Actress, is the only actress to win an Oscar for a role in which only one word is said (she says, “Water!” in the famous scene in the movie when Keller understands that what she is touching at the pump is called water). The original 1959 The Miracle Worker play ran for 719 performances and won the 1960 Tony Award for Best Play, in addition to Best Direction, Best Stage Technician, and Best Actress.

#4 She was awarded the Presidential Medal of Freedom, the highest honor that an American civilian can receive.

In addition to Oscars and Tonys being awarded for adaptations to her life story The Miracle Worker, Helen Keller received many awards during her lifetime. She received the Theodore Roosevelt Distinguished Service Medal in 1936 and in 1964 was awarded the highest honor that an American civilian can receive, the Presidential Medal of Freedom. She later received Brazilian Order of the Southern Cross (1952), the Philippines' Golden Heart, the French Legion of Honor (1952) and Japan's Sacred Treasure. She was elected to the Women's Hall of Fame at the New York World’s Fair in 1965, the Alabama Women’s Hall of Fame in 1971, and the National Women’s Hall of Fame in 1973. A U.S. Stamp with a picture of Keller and Sullivan was issued in 1980. Other countries have issued stamps with her image as well, including Spain, India, Liberia, Nicaragua, Republic of Maldives, Mauritius, Brazil, and Japan.

#5 She was well-educated and the first deaf-blind person to earn a Bachelor of Arts degree. 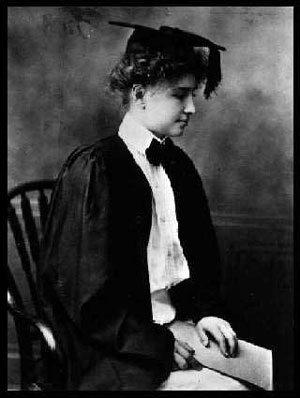 #6 She performed on the Vaudeville circuit as a speaker. 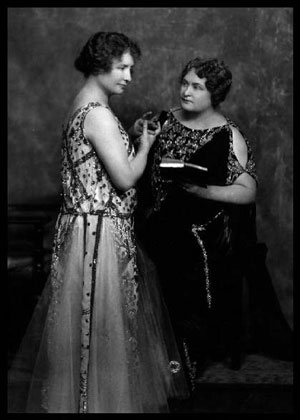 The public was intrigued by Keller and wanted to see for themselves if she could do all of the things she was credited for – most deaf-blind people during this time were institutionalized and assumed to be “retarded,” rumors also circulated that Keller plagiarized, that her books were written by ghost authors, and that her teacher Anne Sullivan and her husband used Keller to spread their own views. Keller wanted the opportunity to re-tell her story the way she wanted it told, to be an advocate, and to educate others on the struggles of the deaf-blind.

Keller was billed as “The Star of Happiness” and her show was a success. The audience was surprised to hear her speak and the most popular part of the show was the Q & A at the end, where Keller got to showcase her quick wit and push her political views. When asked if talking tires her, Keller responded, “Did you ever hear a woman who tired of talking?”

#7 She was a world traveler and visited a total of 39 countries across 5 continents. 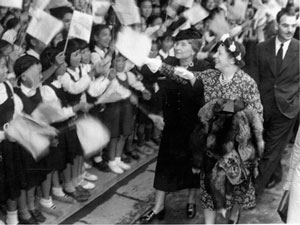 Helen was a world traveler and visited a total of 39 countries across 5 continents. She was an activist for both the American Federation for the Blind and Helen Keller International (which she helped to found), and spent much of her later years traveling around the world, raising money and awareness for the blind and other social issues.

She didn’t slow down. In 1955, when she was 75 years old, she embarked on one of her longest and most grueling journeys - a 40,000-mile, five-month-long tour through Asia.

#8 She was a dog lover and was the first to bring the Japanese Akita dog breed to America. 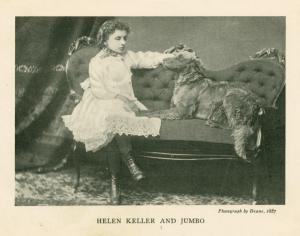 She loved dogs and had dogs throughout her life.

She introduced the Japanese Akita breed to America after receiving her first Akita dog, which was a gift from police officer Ichiro Ogasawara during one of her trips to Japan.

#9 She had a love affair with one of her assistants.

An interesting story that is not included in many biographies about Helen Keller is she had a love affair in 1916 at the age of 36. Anne Sullivan and Keller worked closely together and lived together, however, Sullivan was away seeking treatment and recuperating from tuberculosis. Peter Fagan, a 29-year-old Boston Herald reporter, became Keller’s secretary during this time and they fell in love. However, 1916 society, including Keller’s family and Sullivan, didn’t think women with disabilities should get married or have normal romantic desires. Fagan and Keller had taken out a marriage license and had planned to elope. They tried twice to run off together, but were stopped by Keller’s family and teachers. The third time, Keller waited on the dark porch with her packed bag, but Fagan never showed up. Some of Fagan’s family say the family legend is that Fagan was threatened by the Keller family and he retreated because he feared for his life. They also say Keller’s teacher Anne Sullivan was jealous of anyone else getting close to Keller and insisted the relationship end.

#10 She was a dignitary with many famous friends. 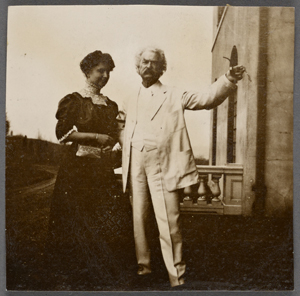 Helen became a celebrity among celebrities and she met a number of influential and famous people.

Among her friends were author Mark Twain and inventor Alexander Graham Bell. She made quite an impact on Mark Twain. They met at a lunch held for her in New York in 1895. He was so impressed with her that he encouraged his benefactor to fund her education, which he did. The financial support allowed her to pursue a college education, becoming the first deaf-blind person to earn a Bachelor of Arts degree.

Alexander Graham Bell, inventor of the telephone, helped connect her family to the Perkins Institute for the Blind, where they found Anne Sullivan and where Helen later attend school for a few years. She dedicated her first book, The Story of My Life to him, “To ALEXANDER GRAHAM BELL who has taught the deaf to speak and enabled the listening ear to hear speech from the Atlantic to the Rockies, I dedicate this Story of My Life."

#11 She was a political activist with strong political views, which were considered radical.

Keller said, “So long as you can sweeten another’s pain, life is not in vain.” She lived by that mantra and is remembered as a social activist who fought for the rights of others. What many don’t know is that she had strong political views, which were considered radical for the time.

She wrote socialist pieces and was such a controversial author that the FBI did surveillance on her, and the Nazis burned a collection of her political essays in 1933. Media that once supported Keller lashed out at her for her socialist beliefs. She remarked on the change of attitude from one editor, “At that time the compliments he paid me were so generous that I blush to remember them. But now that I have come out for socialism he reminds me and the public that I am blind and deaf and especially liable to error.”

Causes she advocated for included:

#12 Helen Keller Day is celebrated on her birthday – June 27th. 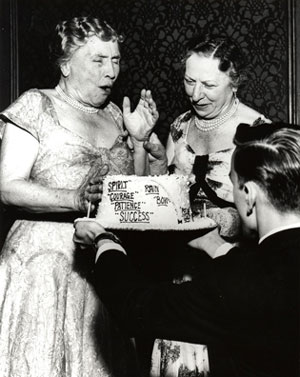 Helen Keller being presented with her birthday cake in 1955. Polly Thomson is on her left and guiding her hand. (Photo Credit: American Foundation for the Blind)

Helen Keller Days have been proclaimed by the mayors of Newark, New Jersey, Annapolis, Maryland, and is recognized annually in the state of Pennsylvania and Alabama. Helen Keller Day was authorized at the federal level by presidential proclamation by President Jimmy Carter in 1980, for the 100th anniversary of her birth.

Her birthplace, a plantation called Ivy Green in Tuscumbia, Alabama, is now a museum and the City of Tuscumbia hosts an annual Helen Keller Festival the last week of June.

Nice article, although there is a mistake. You wrote " Alexander Graham Bell, inventor of the light bulb". He didn`t invent the light bulb, he invented the telephone. And unfortunately, despite being a fantastic woman, Keller followed some of Bell's controversial views on deaf eugenics.

Thank you for letting us know. I just updated that typo! Thomas Edison would not be happy I gave Alexander Graham Bell the credit for the light bulb! :-)

And yes, Alexander Graham Bell was very controversial. I am not personally familiar with Keller’s views on deaf eugenics, but from the dedication she left to him in her book, I could see she was likely very influenced by him. :-(

Recently I was looking for something about inspiration, I rarely have this, but I thought of it. I read a lot of interesting things, and I also highlight your article, which is very good. As for Helen Keller, then I will also leave cool materials in https://studydriver.com/helen-keller-essay/, masterful essays that you will definitely like, there will be a deepening into the topic of inspiration, perseverance and strength, personality originality and, of course, a special attention of Helen Keller's article as a role model for everyone, good luck with your learning!