Charles Jules Henry Nicolle was the first deaf Nobel Prize recipient. The Nobel Prize is awarded annually in Stockholm, Sweden and is widely regarded as the most prestigious award available in the fields of literature, medicine, physics, chemistry, peace, and economics. Nicolle received the Nobel Prize in Medicine in 1928. 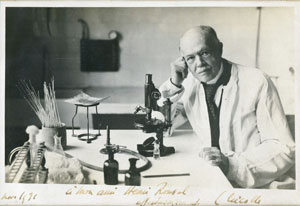 Charles Nicolle at his microscope - the most famous photo of him. (Photo Credit: Henri Roussel [Public Domain], via Wikimedia Commons)

Charles Nicolle was born hearing, in Rouen, France, on September 21, 1866. His father was a physician, and so, in spite of a wide range of interests including history, literature, and philosophy, he followed his father’s footsteps and also became a doctor. His choice became a challenge as he experienced a progressive hearing loss, and by the age of 20 he was deaf.

Typhus had been a highly communicable and frequently fatal disease. It devastated armies during wars as well as prisoners living under unsanitary conditions. Typhus affected displaced populations suffering from famine, floods, and other natural disasters, and in general, it was a disease of poverty. Dr. Nicolle studied this disease for seven years, and discovered that lice were responsible for transmitting the disease. The discovery came about after he observed typhus patients spread the disease to others both inside and outside of the hospital, even their clothes seemed to spread the disease. The patients were no longer infectious after they had a hot bath and clean clothes. Controlling and eliminating lice meant controlling and eliminating typhus. For this life-saving discovery, Dr. Nicolle won the Nobel Prize in Medicine in 1928.

“ The disclosure of a new fact, the leap forward, the conquest over yesterday’s ignorance, is an act not of reason but of imagination, of intuition.”

Nicolle died in 1936 at the age of 69 in Tunis, where he was still a bacteriologist and Director of the Pasteur Institute. Both of his two sons, Marcelle and Pierre, followed in his footsteps and became well-known physicians. Nicolle has been honored on postage stamps in France, Tunis, and Guyana. He forever changed biomedical science and his discoveries helped to save millions of lives. 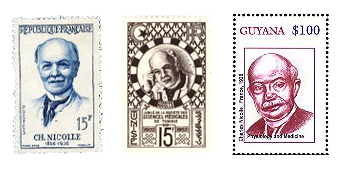 See this example sentence about Nicolle:

English Example: Dr. Charles Nicolle was born hearing but became deaf by the age of 20. He was the first deaf person to receive a Nobel Prize. It was for discovering Typhus is spread by lice.

May I share these articles with my students?   I teach three ASL I classes and am emphasizing to my students the ABILITIES of Deaf and hearing impaired.  Articles like this would be instrumental in changing the mindset of ability vs. disability.

Yes, of course, please feel free to share these with your students!