When he was seven years old, LeRoy Colombo contracted spinal meningitis, which left him deaf and paralyzed from the waist down. His brothers encouraged him to swim, a therapy which resulted in his ability to walk again. Even so, he felt more at home in the water, and found his life’s purpose as a swimmer.

At the Texas School for the Deaf in Austin, he broke several swimming records for speed and distance. When he was twelve, he saved a child from drowning, which became the first of many lives he saved. He was also one of the first people to surf in Galveston, Texas. In 1923, Colombo joined the Galveston Toboggan Surf Club, which required members to swim for three straight hours without outside support or floating.

“He saved more people than I ever heard of or knew. He was one of the greatest lifeguards that ever lived. I know where he saved three people at one time, and once, four. He could sense anything going on in the water and see it before anyone else could. He’s a legend in the city of Galveston.”
- D.K. Lack
Galveston Police Chief

He climbed into the lifeguard station perch in Galveston when he was 18, and worked there for over 40 years. He is included in the 1976 Guinness Book of World Records for saving 907 people, although the total number of saves is over 1,000. One of the most dramatic rescues involved diving under burning oil from a tugboat that had burst into flames to save the lives of two crewmen.

Galveston Police Chief D.K. Lack said, “He saved more people than I ever heard of or knew. He was one of the greatest lifeguards that ever lived. I know where he saved three people at one time, and once, four. He could sense anything going on in the water and see it before anyone else could. He’s a legend in the city of Galveston” (The Deaf American, 1974, p. 23).

In addition to life-saving, Colombo enjoyed endurance racing. In 1927, he swam in a race across the Gulf of Mexico – a fifteen-mile swim. Only he and his brother finished, as the others dropped out from jellyfish stings and exhaustion. Colombo’s time was 11.5 hours, over three hours ahead of his brother. He won all the distance races held in the Gulf of Mexico between 1929 and 1939. 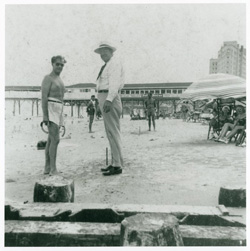 LeRoy Columbo on the beach during the peak of his lifeguarding career. (Photo Credit: Jean F. Andrews., Retreived from Deaf in Prison Blog)

After his hearing lost, Columbo struggled in local public school. He learned sign language and continued swimming in the indoor pool at the Texas School for the Deaf in Austin. He lived during a time of great prejudice towards deaf people and faced both poverty and discrimination. None of his hearing family or any of the hearing lifeguards that he worked with learned sign language. Yet, he didn’t let other people’s opinions or lack of support dictate what he could do. He loved the water and he loved saving lives.

One of Colombo’s greatest contributions, however, was as a living example that deaf people could work as lifeguards. He is cited in literature used in disputes about Deaf people becoming lifeguards, even though there is still discrimination based on fears a deaf lifeguard could not hear cries for help. Today, The American Red Cross allows Deaf people to hold this position, but the YMCA does not.

Others argue it was Colombo’s deafness that helped him to be such an acute and successful lifeguard. Some researchers have found deaf people have enhanced visual attention, visual perception, and motion detection skills. One hypothesis is Colombo wasn’t as distracted by the sounds of noisy seagulls, the crashing surf, or people laughing and shouting on the beach. He used his prowess and knowledge of the water, currents and riptides, to quickly recognize people in distress. 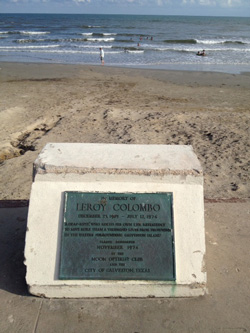 He retired from being a lifeguard at 62 because of a heart condition, but continued swimming in the Gulf of Mexico a mile a day in both summer and winter for 6 more years, up until a few weeks before he died at the age of 68.

Flags in many parts of Texas were lowered to half-mast when he died, he was honored in the Texas legislature with a resolution and moment of silence, and a plaque was erected in his honor at the Galveston beach where he patrolled for over forty years. Colombo is remembered today in an annual 5K LeRoy Colombo race held each summer in Galveston. In 2002, Colombo was inducted into the Texas School for the Deaf Athletic Hall of Fame. In 2006, a Texas legislature act enabled the unveiling of The Leroy Colombo Swim Center during the Texas School for the Deaf’s 115th birthday celebration. Some still say he was the "World’s Greatest Lifeguard."