Gallaudet University in Washington D.C., founded in 1864, was the first school for the advanced education of people who are deaf or hard of hearing. It continues to be the only liberal arts university in the world for deaf students, with all of its programs uniquely designed specifically for deaf and hard of hearing learners. However, since its inception in 1864, for over 123 years, every university president had been a hearing person.

A Need For Change

In 1987, Jerry C. Lee announced his resignation as President of Gallaudet University, so the search for a new president began. There were three candidates:

In 1988, the predominantly hearing board of trustees announced its selection of Elisabeth Zinser (the only hearing candidate), and the campus community was outraged.

A Demand For Change: The Protest Begins 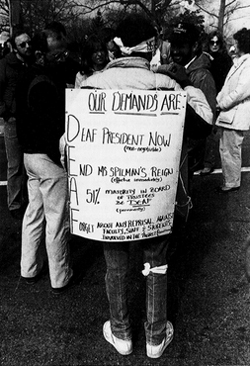 Photo of a participant at the Deaf President Now Protest in March 1988 wearing a poster of demands. (Photo Credit: John B. Christiansen, Sharon N. Barnartt - Deaf president now! : the 1988 revolution at Gallaudet University, p. 75, via Wikipedia)

Students, alumni, staff and faculty members congregated to undertake what is one of the most famous civil rights movements today: the Deaf President Now protest.

The seven-day protest generated international media coverage, and brought attention to the oppression and discrimination deaf people experienced on a daily basis. I. King Jordan gave a speech, announcing the need for the whole world to pay attention, and supporting the student demands.

“ The world has watched the deaf community come of age. Together we've overcome our own reluctance to stand up for our own rights.”

On March 10, Elisabeth Zinser resigned!  On March 11, more than 2,500 protestors marched on Capitol Hill with banners announcing, “We still have a dream!”  They were determined to see all 4 demands honored.

Finally, on March 13th, all four demands were met with the selection of Phil Bravin, a deaf board member, as the new board chairperson, and I. King Jordan selected as President of Gallaudet University. Jordan served from 1988 until 2006 as president, and every president since then has been deaf. 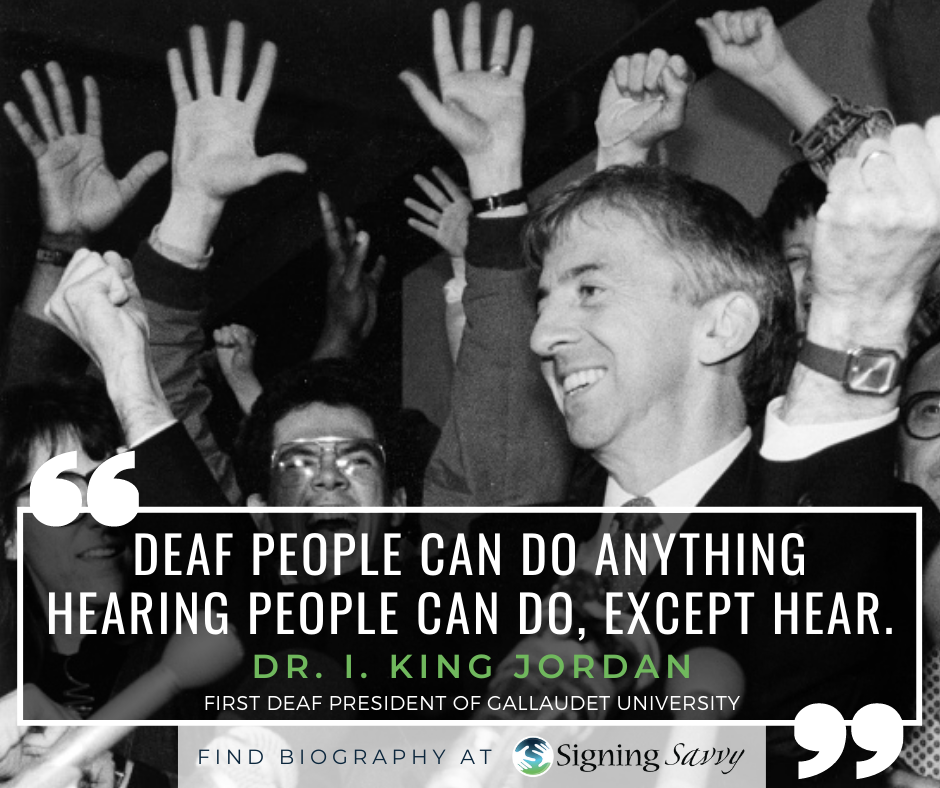 Surrounded by students, I. King Jordan, raises his hands to celebrate his appointment as the first Deaf president of Gallaudet University in Washington, D.C. Quote from Dr. I. King Jordan: "Deaf people can do anything hearing people can do, except hear."
(Photo Credit: Bettmann (1988, March 13). Getty Images.)

The Right Leader For Change: Deaf And Qualified 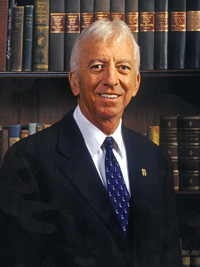 Dr. I. King Jordan in August 2015. He served as the eighth President of Gallaudet University from 1988-2006. (Photo Credit: Wikimedia Commons)

Being deaf isn’t enough to be president of a University. I. King Jordan earned a B.A. in 1970 from Gallaudet University, then got an M.A. and Ph.D. from the University of Tennessee. He was a faculty member and chairperson at Gallaudet in the Department of Psychology, and was appointed as the Dean of the College of Arts and Sciences.

Dr. Jordan holds twelve honorary degrees and was honored with numerous awards. In 1990, President Bush appointed Dr. Jordan as Vice-Chair of the President's Committee on Employment of People with Disabilities. In 1993, he was reappointed to this important position. On April 6, 2010, it was announced that Jordan had been appointed by President Barack Obama to serve on the Commission on Presidential Scholars, which awards one of the Nation’s highest honors for students.

I. King Jordan served as the eighth President of Gallaudet University from 1988-2006.

On January 1, 2016, Roberta “Bobbi” Cordano became the eleventh President of Gallaudet University. President Cordano is the first deaf woman to be officially installed as Gallaudet President.

Due to the success of the historical Deaf President Now protest, initially put into action by Gallaudet students, Irving King Jordan became the very first deaf President of Gallaudet University. Gallaudet students led the way to insuring their university would be governed by a deaf president. They have continued to be active in keeping their dream alive.

See this example sentence about Jordan:

English Example: I. King Jordan was the first Deaf President of Gallaudet University.