In all my years of signing, I have never had anyone say to me, "I can't believe how easy fingerspelling is!" or "Man, I really LOVE fingerspelling all these odd words that don't have signs for them." It just isn't a favorite part of the job! It is the thing that makes even seasoned interpreters break into a sweat when they have to start signing for a calculus class or in a court of law with a bunch of foreign names flying through the air.

I have come up with a few tricks through the years to make it easier, but the only true way to improve your fingerspelling skills is to practice. The practice needs to be both receptive and expressive.

Expressive - When you are signing/fingerspelling something to someone else.

There are some good websites out there that offer some examples to get that receptive practice. (See our Facebook page for one sited there.) I also want to take this opportunity to show you a few ways Signing Savvy can help you with your fingerspelling. Although we have many savvy users of the site, it can be easy to overlook features if you have not used them before.

First, Signing Savvy shows a fingerspelled version of every word. When viewing a sign video, the squares next to the word indicate the different versions of the sign that exist and there is always a "FS" version, which lets you see the word fingerspelled. It is a good reference, however, you will notice that the "FS" version individually signs each letter and does not demonstrate the flow between the letters. (Note: There are some words that should always be fingerspelled and the main video is of the word being fingerspelled - see ASL as an example and notice the flow between letters). You will notice that underneath the video it tells you what is currently being signed, including the current letter being signed when fingerspelling a whole word. 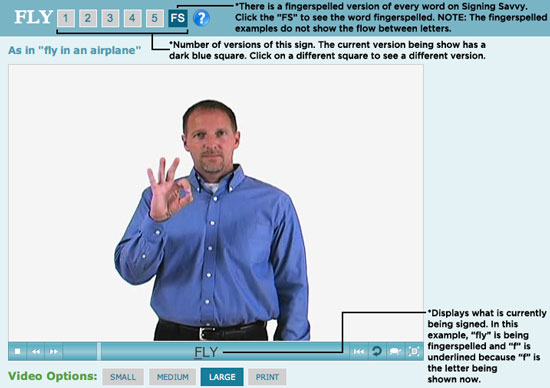 I thought it would be interesting to put the question out there to our Facebook followers and see if they could come up with a few interesting tricks of their own. Here are some of their suggestions:

"Throwing your letters" - This is something that many new signers do and it is a bouncing movement either up and down or forward that is disruptive and bothers with the reading of the fingerspelling. The elbow should stay still and just have the fingers moving and the wrist when appropriate.

We also need to remember the general rules for fingerspelling. It isn't right to makeup signs for words you don't know because they are too long to fingerspell. You may laugh, but I see it happen all the time! Some people have even used the excuse that they work with young children so they can't fingerspell. That is NOT true. When young children are fingerspelled to for small words that normally can be fingerspelled, they focus on the shape of the word. They will copy the shape to the best of their ability and then later they will make the connection to the alphabet. I have seen little children who are too young to know better, spelling words like BUS and BUG and are not even aware that they are spelling things.

I invite everyone to join us on our Facebook page where we have regular discussions and questions going back and forth about the hot topics in sign language and Deaf Education. It is just another great resource offered to you by Signing Savvy!