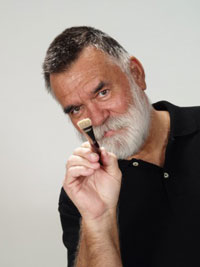 Chuck Baird was often referred to as a playful mind and a generous heart. I was able to meet Chuck as he visited with a group of young Deaf and Hard of Hearing children. I have to admit his playful mind and generous heart is what stuck out to me the most while I watched him totally pull the children into his wonderful world of art.

Chuck was born deaf 64 years ago in Kansas City, Missouri. He graduated from Kansas School for the Deaf in 1967 and attended Gallaudet University for two years. Later he attended Rochester Institute of Technology's National Technical Institute for the Deaf (NTID), where he played football for their team for only four games. He decided to give up the sport for his love of art instead.

Robert Baker of NTID’s Dyer Arts Center described Baird best as “a giant of an artist and a wonderful man.” Chuck’s time at NTID also included time spent in the Drama Club. He acted in several productions and designed and painted several sets. One of his most memorable plays was “King of Hearts” where each night Chuck would recreate the entire set in front of a live audience!

Later in life Chuck worked for DawnSignPress as an in-house artist creating a number of Deaf-related works.

Chuck’s works were known for the genre called De’VIA, which stood for Deaf View Image Arts. This genre explored the perspective of Deaf people and their experiences in a hearing world. Deaf and Hard of Hearing children of all ages loved to see their language, American Sign Language, being used in art to express their point of view.

“Chuck spent his life sharing his talent and love for the Deaf-world via his art. He constantly sought to create spaces where new De’Via artists could be fostered, shared, valued and discussed.”

Rest in Peace Chuck Baird, your talents will live on through the many, many people you inspired with your great perspective and zest for life.