Babies have thoughts and feelings they want to communicate with you much sooner than they develop the verbal skills to be able to express those thoughts through speech. 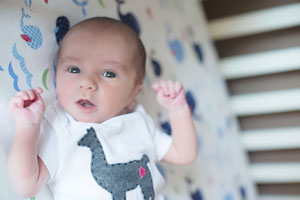 My son waiving his hands at about one week old.

Babies communicate by crying differently in different circumstances, cooing and smiling in response to you, making baby-babble sounds, making facial expressions, mimicking your gestures, waiving their hands, and squeezing your fingers. There are theories and even products to help parents analyze their baby’s cries, but you don’t have to be a baby whisperer to understand what your baby is trying to communicate if you give them tools to express themselves in a way you can understand – baby sign language.

On average, babies don’t start to say words until around 1 year old. However, their cognitive skills for thinking, feeling, and recognizing action and reaction develop much earlier. They also develop hand-eye coordination at an earlier age – first they squeeze your finger and eventually they point, wave, and mimic your gestures.

Babies naturally use their hands and facial expressions to communicate. Both of my sons, like many babies, would pucker their lips into an “O,” tilt their head to the side, and punch their little fist in the air when they were hungry. They are instinctively looking for the breast or bottle, but they are also clearly communicating through their hands and facial expressions.

Because babies are able to make and mimic gestures, they are able to learn baby sign language and use it to communicate before they can talk.

There are many advantages to using ASL when teaching your hearing baby to sign. It is a real language. Because it is a real language, other people are familiar with the signs, there is no need to “remember” a made-up sign, and there are resources to use to look up signs (Signing Savvy, of course!).

Knowing ASL is also fun for children when they see others using it. As the child grows up, they may meet deaf peers or other people who know ASL. Some preschools and daycares are beginning to incorporate sign language into their curriculum and it is becoming more common to see ASL in popular media, such as commercials, television shows, and movies.

There are many benefits of being able to communicate with your baby using sign language before they can talk. Research studies have found parents who sign with their infants and toddlers reported:

Research studies have found that signing activates the area of the brain that makes learning a new word easier4 5 and infants and toddlers that used signs had better language skills than children that did not use signs.6 7 They found children who used signs:

Of course, the greatest immediate benefit is that your baby is able to communicate with you and you are able to understand them.

We started signing with our first son when he was born.  MILK is the first sign he started to use and the sign that he would use most often (he still has an addiction to milk at the age of 2.5 years old!).  He would use some signs, but I remember clearly the first time he used sign to really make a strong statement. I had given him a sippy cup with water in it.  He instantly started to cry, dramatically threw the sippy cup on the ground, and forcefully raised his fist in the air and began repeatedly signing milk.  His actions, combined with his signing, made his message very clear: “Mom, this water is not going to cut it. I want milk!!”  So although he had a mini tantrum, it was short-lived because I knew he wasn’t frustrated just because he didn’t want water, but because we wanted milk – and NOW!

Although most useful for understanding our son’s desires, signing was also a great way for us to learn and practice vocabulary together and get a glimpse into his thoughts.  One example is we would use animal signs when reading books with animals and when playing with animal toys.  Because he wasn’t talking yet, it was hard to know if he was learning the animal names, but we were happily surprised when we went to the zoo and he was excitedly signing all of the animals to us as we saw each new animal. 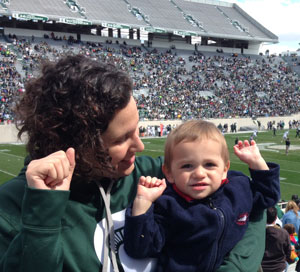 It’s easy to start signing with your baby and it’s amazing to be able to communicate with them through sign before they are able to talk.

To get started, simply use signs when communicating with your child. There isn’t a “right” way or specific order to learning or teaching signs, just start by picking signs that make the most sense in the context of your baby’s life.

May I print this or link to it, to share this article with the patrons at our public library?

Hi Erica! Yes, of course, feel free to share this article. We have more baby sign language articles coming in the near future too!