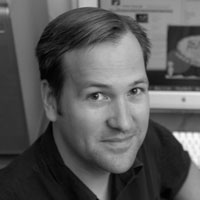 Brian Winn is an Associate Professor in the Department of Telecommunication, Information Studies, and Media and Director of the Games for Entertainment and Learning (GEL) Lab at Michigan State University. Brian designs, creates, and researches interactive media design, including game design, digital game-based learning, interactive health communication, and interactive educational software. Brian’s award-winning interactive media work has been presented, exhibited, and experienced around the world.

Brian is an accomplished teacher who became an Apple Distinguished Educator in 2001 and a Lilly Teaching Fellow in 2005. Winn is a co-founder and director of the undergraduate Game Design and Development Specialization at Michigan State University, which is rated in the top game programs in North America by Princeton Review. Brian serves as faculty advisor of the MSU SpartaSoft game developers student group and was appointed by the Governor of the State of Michigan as a member of the Michigan Film Office Advisory Council.

Brian earned his bachelor of science degree from the University of Minnesota and masters of science from Michigan State university, both in Computer Science and Engineering.

Since the mid-1990s, Brian has worked on several sign language educational software projects, including the Personal Communicator CD-ROM, ASL Browser web site, Signing Online web site, and the Come Sign with Me museum exhibit.  Brian is a co-founder of Signing Savvy and serves as the all-around technology guru.